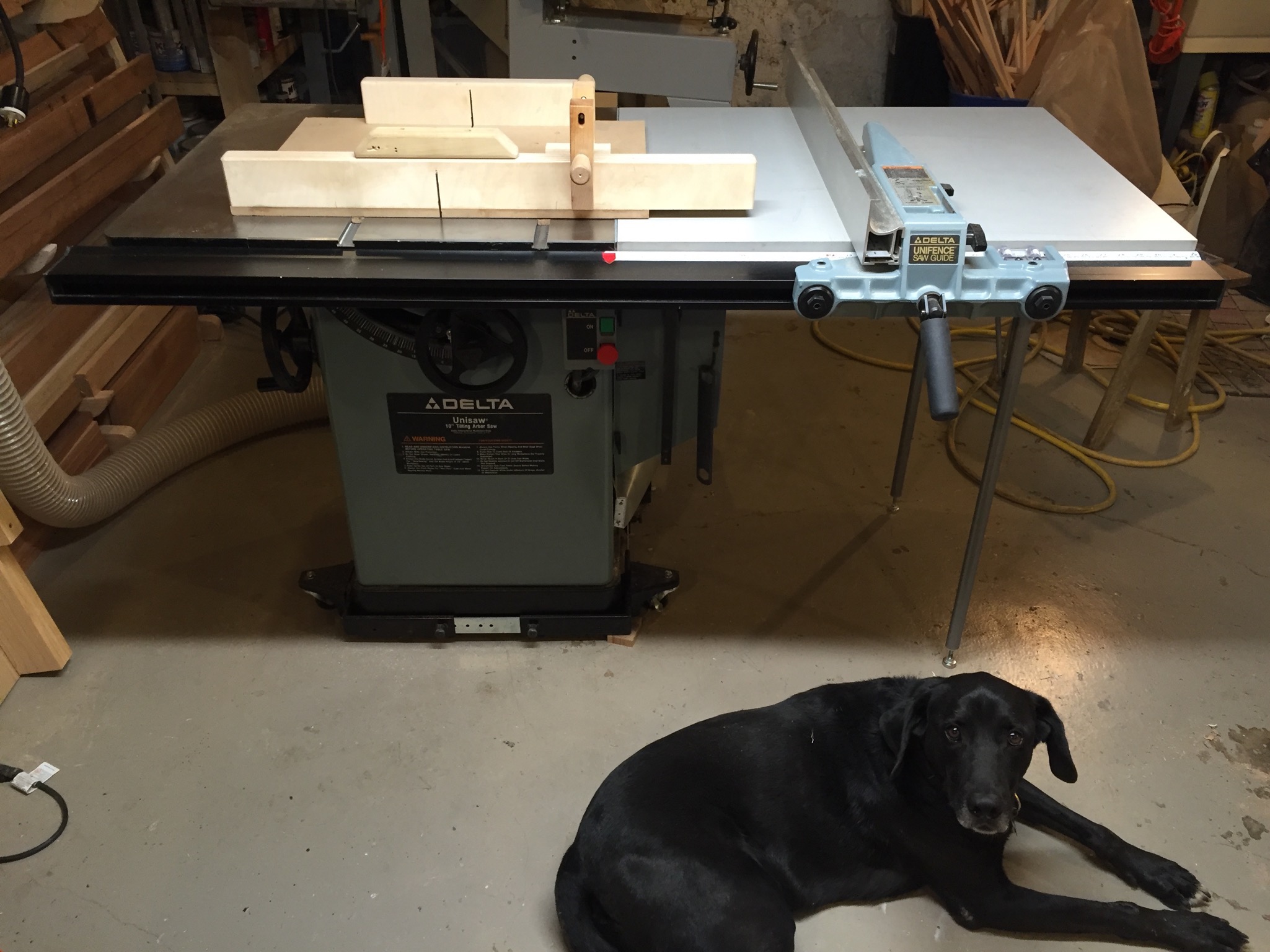 A table saw is the heart of most small woodshops. This weekend we decided it was time for the heart transplant. We replaced our trusty Delta Contractor-style saw with a more powerful Cabinet saw.

“Why? ” you ask, would we do this when we had just managed to restore our shop back on an even keel after replacing our dust collection system the previous week.  The simple answer is we needed a more powerful saw.

Over the past few months we’ve been moving from working with plywood and softer woods like Pine, Alder, and Poplar, to woods like Walnut, Cherry, Maple, and Beech. These woods are much harder than the previous ones. They are also more sensitive to the feed rate, or speed at which they are cut. Too slow a feed rate, and the wood gets scorched and potentially warped by friction from the blade. Too fast a feed rate and the saw chokes. Both situations are dangerous as they can result in “kick back” in which the piece of wood is flung back, bruising the operator at best, and impaling them at worst.  These are technical details that one would learn in a formal apprenticeship, but are hard lessons in the youtube DIY world.

Since neither of us are enthusiastic about being whacked, or even worse skewered, by wooden projectiles of our own creation. We decided that an upgrade was in order. Fortuitously, a member of the Guild of Oregon Wood Workers (to which we belong) was closing his shop and selling his saw, so we took the opportunity and purchased it.

Integrating the new saw entailed selling our old one, liberating it from the confines of the basement, and then moving the new one in. This is no easy feat. We have our shop set up in our basement. The stairs to the basement are quite narrow and the saws are heavy and unwieldy. Once again, as luck would have it, the new owners of our trusty contractor saw helped us to both move the old saw out and bring the new saw in. This was super helpful as there was a good chance that if we tried it ourselves, one of us would have got squished.

The reason replacing the saw feels like heart surgery is our small shop became a disastrous and dangerous mess. Lots of stuff needed to be re arranged to accommodate the new beastie. Wood and partial projects were precariously balanced on each other temporarily. Our out feed table, which supports longer pieces of work, and provided storage for additional saw accessories went to the new owner. All of the sleds and jigs we had previously made needed to be rebuilt. It’s an absolute mess. That’s the downside.

The upside is we have a more capable tool with much better dust containment. Even though we need to rebuild our sleds and jigs, we can do so faster, more accurately, and safely, while making small improvements based on experience we have acquired.

UPDATE: We are back on line! The saw’s been calibrated. The basic sleds have been rebuilt. The Unisaw saw works like a dream.

Stay tuned. We can make sawdust again. We may have product to show soon!?!